From John Christiansen, a descendent of the Christiansen family:
"I came across these old photographs recently. The group shot is the crew at the Christiansen factory in Chicago taken around 1903. Carl is 2nd from left front row and John , his son, is seated next to him in the middle. The large outdoor photo is a company picnic in 1916. They continued making shop and lab furniture until around 1940. Some of the later benches had cast iron head and tail vises replacing the maple. These vises were made by Abernathy Vise , a company purchased by Carl Christiansen. So if your bench has an Abernathy Vise you can be sure that the bench is made by Christiansen. I enjoy your blog and it makes me feel good to know that these benches are still being used and appreciated.
Best Regards,
John Christiansen" 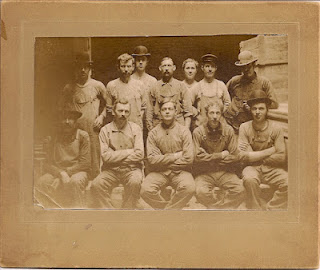 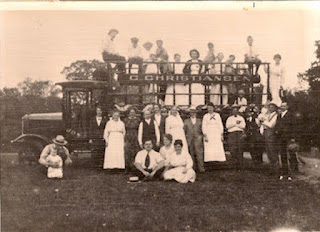 My name is Tom. I live in Richmond, VA and would like to share a few pics of my newly refinished C Christiansen workbench. I don't have any before pics here as I am trying to find the right archive folder that these are in. Anyway, here is the story behind this bench. I do not know the exact age of this workbench but estimate it to be late 1800's to early 1900's. It came to me from my Grandfather who lived in Logansport, IN when he passed in 2005. The workbench was in his basement workshop for more than 30 years. Prior to that, it was used by the Coca-Cola bottling plant in Logansport, IN before they relocated to Kokomo, IN. My Grandfather worked at the plant for 44 years retiring in 1980 as VP and General Manager. He was given the workbench when the plant moved to Kokomo (I think around 1970?) because they were going to throw them away and offered them to several employees for free. It is my understanding from family and former employees that several of these workbenches were in the building that the Coca-Cola company purchased when they franchised the operation in 1907. They were all painted Coca-Cola green and this one remained this way until I stripped the paint this weekend and finished it with danish oil. I left the visible burn marks and did not sand or change the condition in any way. I love the character and the history all the marks on the top bring out. The workbench has two Abernathy Screw vises and a built in bench dog stop on top. The top is solid maple, the drawerfronts are maple and the main carcass is solid maple and maple plywood. It is as solid as the day it was made. Hope you enjoy the pics.
………..
Here is my "Before" picture. I found it! Also, I found a few ads in Popular Mechanics, Furniture Maker and some other trade journals via google books from the early 1900's Based on the address listed on the manufacturers tag on my bench, I can safely say this bench was made between 1919 and 1930. Prior to 1919, C Christiansen operated from 2219 Grand Ave in Chicago, and in a 1927 publication, the ad I saw showed them at 2814 W 26th St - the address on my bench. An ad from a 1930 publication showed them at the 2814-2842 W 26th Street - the exact address on my bench tag. I love the history of the company I found on your site and being able to combine this with the family history makes this piece a family heirloom. I hope to pass it along to my son one day and keep a woodworking tradition alive for generations to come! Tom 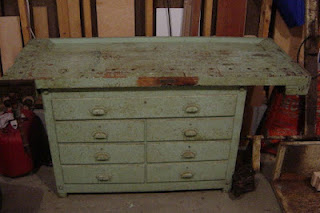 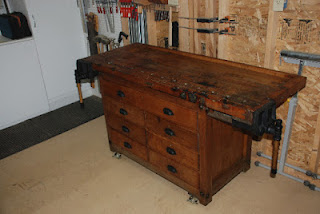 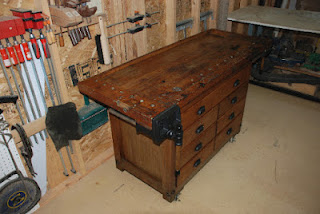 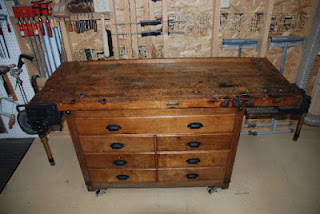 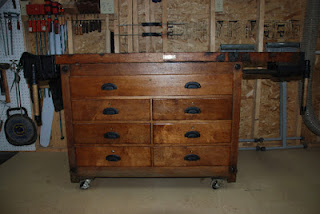 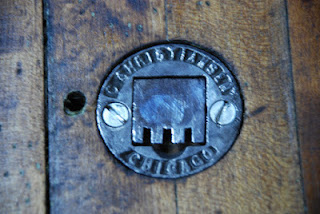 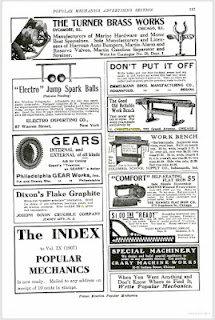 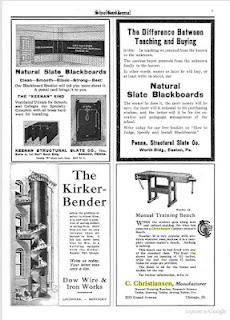 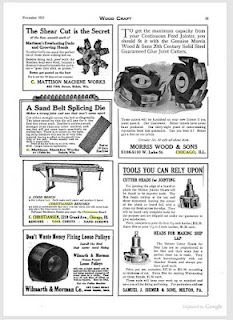 ---- < • > ----
Listed in my archives only as 'Phillips", a smaller Christiansen workbench on three drawer and cabinet base. As found condition. 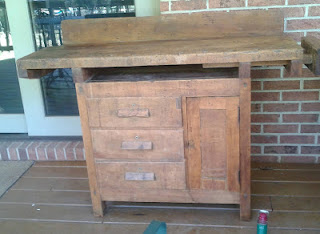 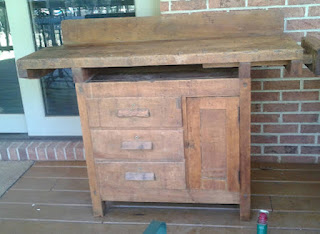 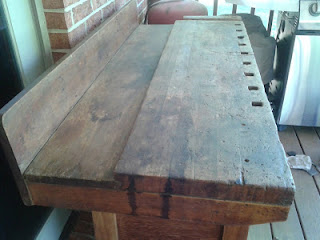 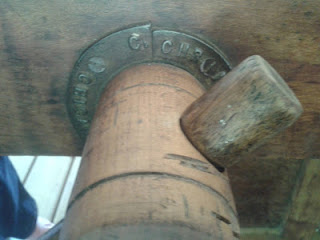 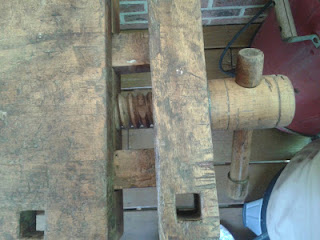 I have recently purchased a desk with two swing out stools attached. The plaque reads that it is by C. CHRISTIANSEN and I would love to get any info I can on it. Your web info seems to be all I can find on it
Thank you
Barb

What you have is most likely a manual arts training work table with attached stools for students to sit on. I’m in the process of putting together a brief pictorial history and text of what is knowns of Christiansen (mostly information given me by the family) to be posted online shortly. Depending on the size and design of the work table, it could have been made for a variety of purposes from a general classroom work table up to a drafting table.

It would be wonderful if you could provide some images of your bench as I have not heard of or seen one like it. The Christiansen family business made workbenches of a variety of patterns, along with tool boxes, at the turn of the 19th-20th centuries in Chicago, Illinois. Primarily it seems they sold to manual training schools and to factories.

I have attached photos for you to see. I hope you enjoy them! It is dirty and I have not cleaned it yet but it has held up pretty well If its as old as we think!
Thank you for your time
Barb 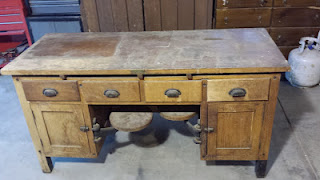 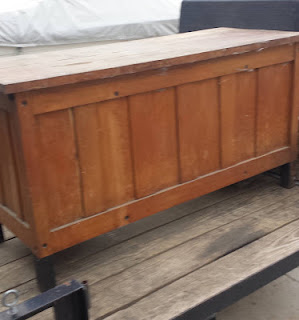 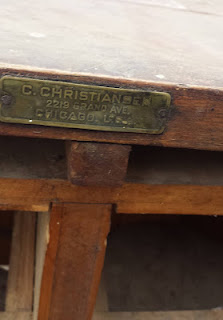 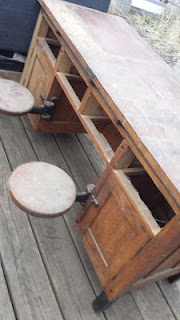 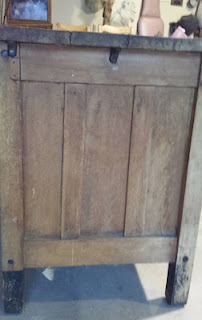 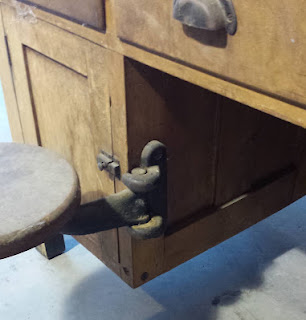 The lady we bought the desk from said she picked it up years ago from the university! So that makes sense.

Without a doubt for manual arts, perhaps 1910-1920. This would be the period of Sloyd and the formal Manual Arts educational system in many school systems.

The spaces under the desk top could have been for drawing tablets storage, for carving work storage or similar large flat work pieces. The lack of deep gouges on the surface would indicated this was not used for heavier woodworking, possibly relief wood carving, drafting/drawing, paper cutting and forming or textiles.

It’s unusual to find something like this as most would have been tossed and destroyed as schools were ‘upgraded’ and Sloyd and Manual Arts became a thing of the past.

The feet would have a black or dark green paint to hide scratches. The rest of the bench most likely was varnished, spar or something similar. Even possibly shellacked.

I’ll include this photos with a nod to you and let you know when the history goes live!

August 12, 2021 Note: Shortly after moving to Boston, I was driving around the North End (aka Little Italy) in my old '67 blue Chevy Step Side pickup when I came upon a pile of the seats you see in the last photograph. They were on the curb, waiting for the next garbage truck to pick them up. After looking around, I loaded them to my truck and went home. Eventually all were sold to a local antique shop. I didn't know it at that time, but the building they came from was the North Bennett Street School, the early home of Sloyd education in Boston. 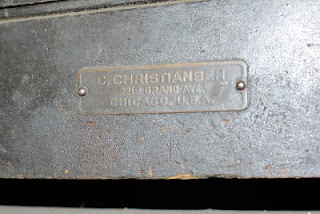 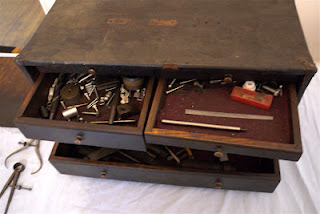 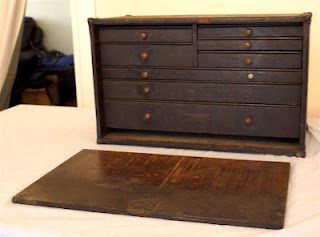 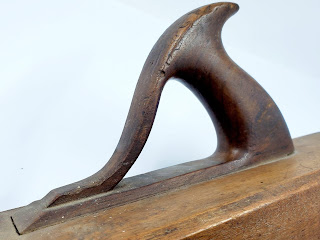